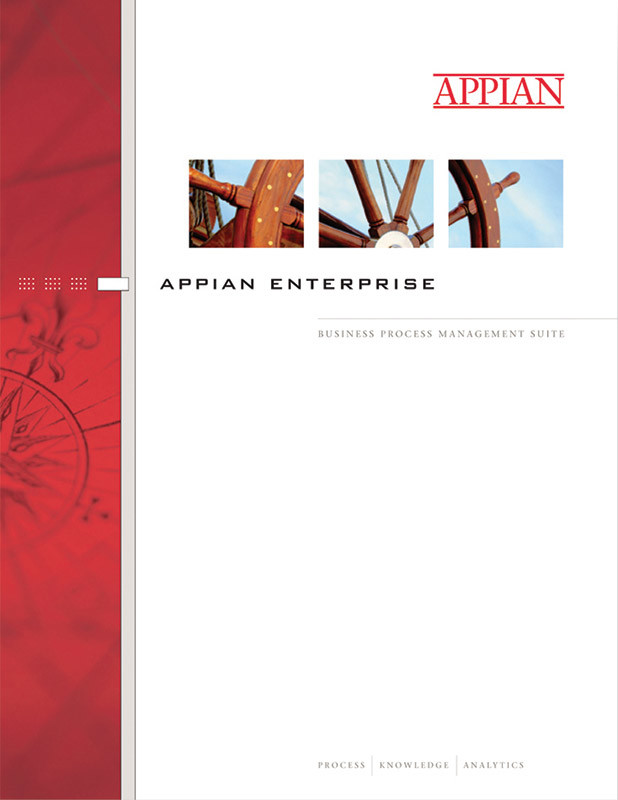 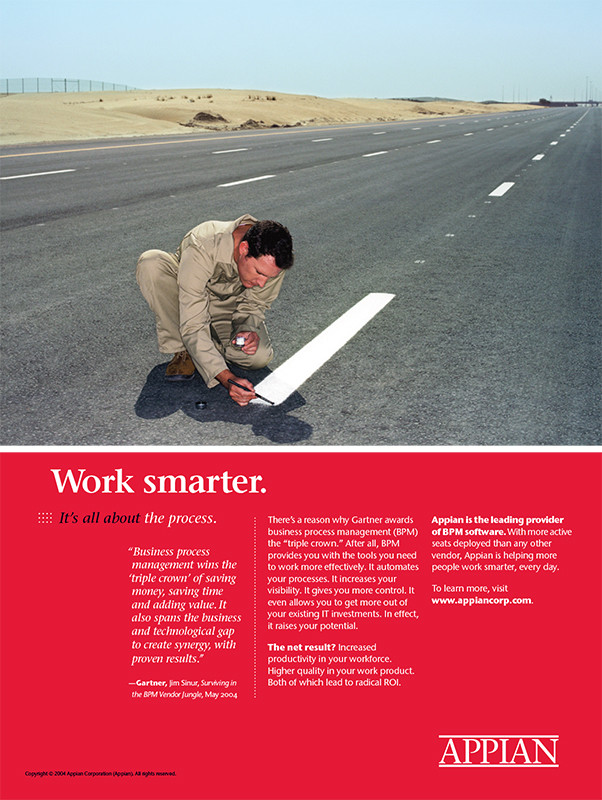 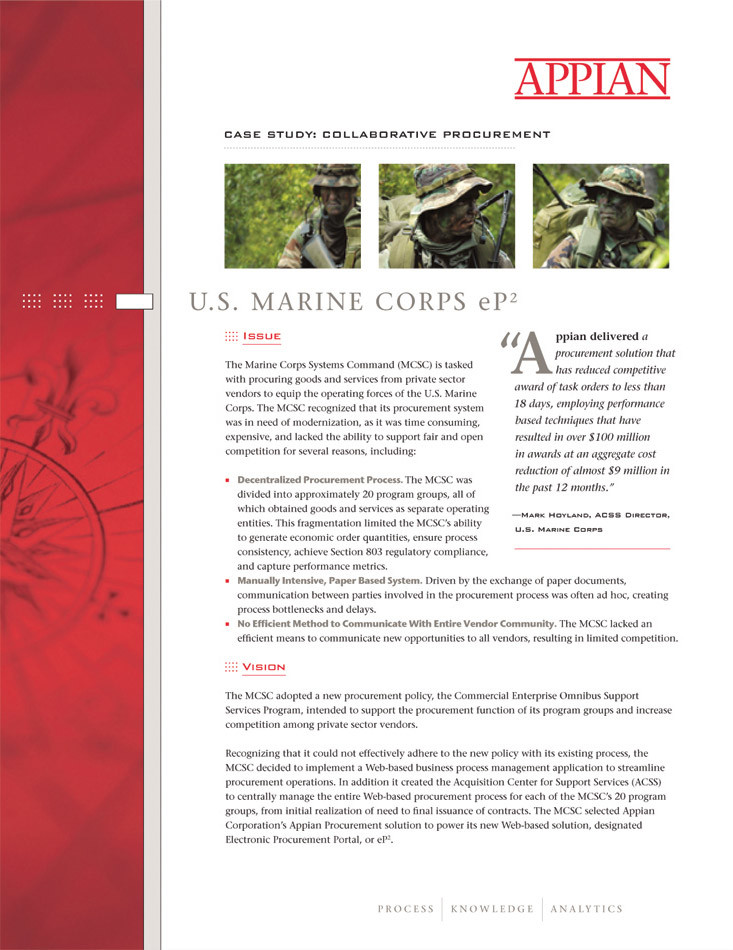 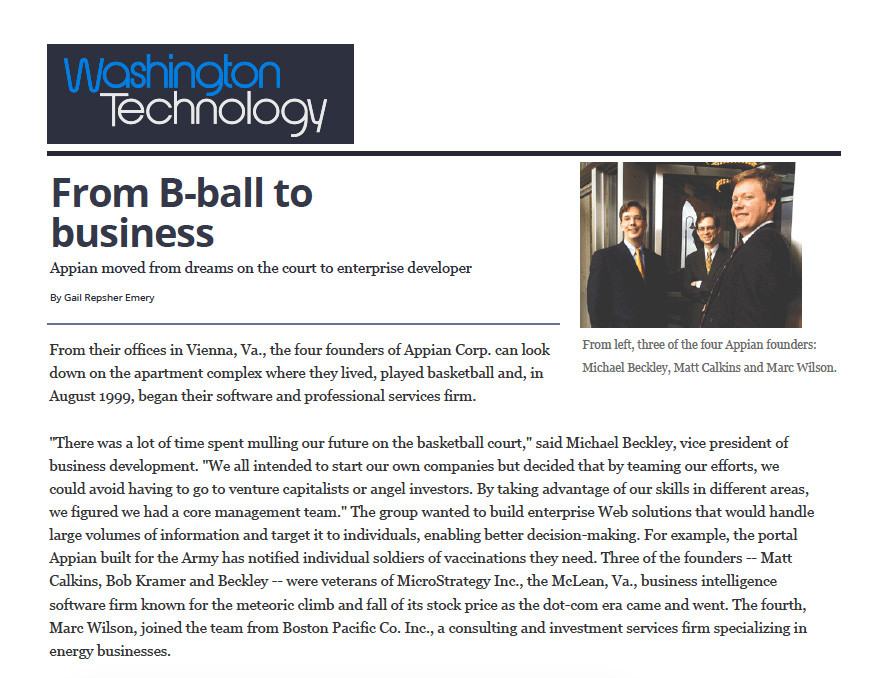 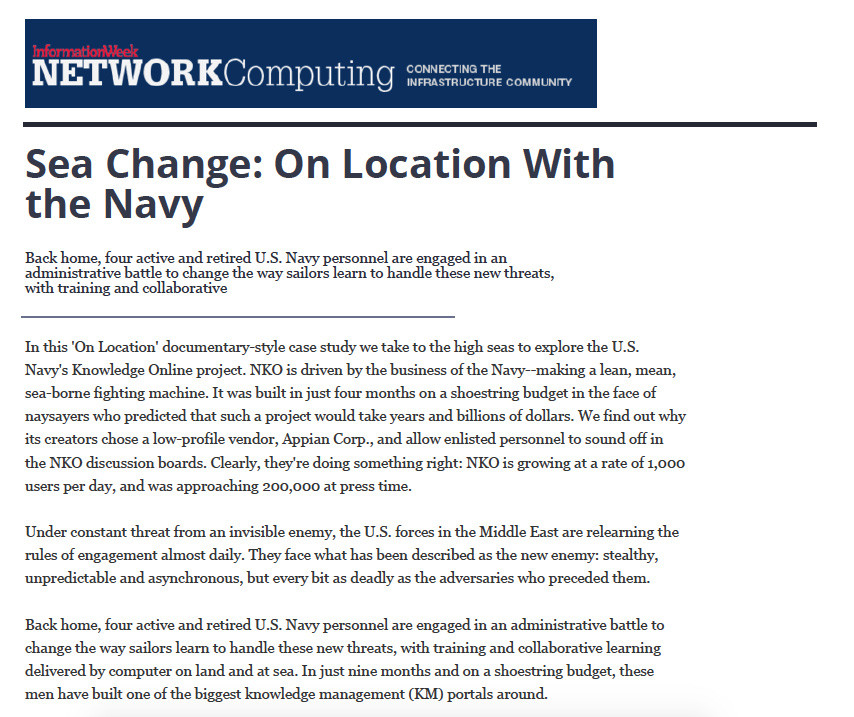 Few people knew that Appian was the architect of the world’s largest intranet portal, the 1.2 million-user Army Knowledge Online (AKO) for the U.S. Army. Appian’s clients included federal agencies like the U.S. Navy, the U.S. Marine Corps and the U.S. Department of Transportation, along with private sector clients like General Motors, GlaxoSmithKline PLC, FedEx and Sprint PCS. Despite this impressive list, the company remained virtually unknown outside of its own corporate walls.

In order to sustain its growth in the federal government and commercial sectors and to raise the company’s visibility, Appian urgently needed a federal marketing PR firm. The purpose was to promote the company and its work with AKO, its impressive successes and to support Appian’s sales force.

Appian challenged Boscobel to produce positive results in just three months.
Our goals were to brand Appian as the architect of AKO, and obtain immediate coverage in DOD trade publications.

Boscobel first conducted a Reporter Survey, where our senior public relations staff interviews reporters on their knowledge of Appian and AKO. This led to Appian’s first coverage in Washington Technology.

The “kickoff” of the PR campaign was an interactive demo of AKO at Ft. Belvoir, Virginia. Reporters from federal IT and DOD-focused publications attended the demonstration, which was conducted by Colonel Robert Coxe, the Army’s Chief Technology Officer. Appian provided technical support.

The visibility gained by this demo raised awareness of Appian with the federal IT community as well as the media.

The Ft. Belvoir demo was a smashing success leading to headline coverage in National Defense, Federal Computer Week, The Washington Post, Potomac Tech Journal, SIGNAL magazine and the Washington Business Journal, just to name a few. The coverage equaled nearly $100,000 in advertising equivalency over a three-month period, with a circulation of more than 1.25 million.

Even more impressive, Appian generated more coverage in three months in its targeted DOD/ military and federal IT publications than its top seven competitors combined. These PR results also helped cap a banner year for Appian, shown in the company’s 325 percent growth. In fact, Boscobel was so successful with the PR and Thought Leadership, that Appian decided to ask us to handle all of their marketing, advertising, metro and billboards, sales collateral and website development. Our full page color ads had the coveted premium position of the back cover of Government Executive.

From devising attention-getting media pitches about enterprise software to shepherding exceptionally shy executives through photo shoots and press interviews, Boscobel has played an integral role in the shaping and successful execution of Appian’s federal marketing strategy. You and your team make my job very easy!